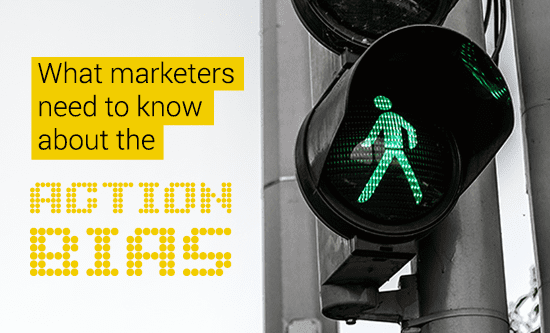 What marketers need to know about the Action Bias

In football, penalty shots are undoubtedly one of the most stressful parts of a goalkeeper’s job, yet one of the most exciting moments for fans watching the game. As the goalkeeper, making the split decision to dive right or left results in them either potentially being branded a villain or showcased as the team’s hero.

Interestingly, despite it being nearly impossible to tell which way the shooter will kick the ball, it’s fascinating to note that the goalie will rarely remain stationary, yet they double their chance of success with no action (Bar-Eli, Azar, Ritov, Keidar-Levin, & Schein, 2007). This perceived need to take action, regardless of whether or not it’s actually necessary, is what’s known as the ‘action bias’.

This bias to action can be applied to nearly any situation in which humans find themselves. In essence, the theory suggests that we often decide to take action – any action – rather than simply sitting idle as results unfold. This desire to act suggests that we place overwhelming value on actions as opposed to idleness. Actions are seen as productive and valuable, despite the fact that they may not lead to a desirable outcome. Instead in many situations, the virtues of restraint, caution, and consideration may be the most beneficial.

As marketers, it’s important to understand our customers and be cognisant of when an ‘action bias’ is most likely to occur. If you understand this phenomenon, you will have significantly more capacity to leverage the bias among your customers. Conversely, should the bias have the potential to derail a customer relationship, you can make a plan to counter it.

Generally speaking, an action bias is likely to occur in the following circumstances:

The action bias can be leveraged in many situations, for example nudging parents to invest in their children’s education or occasions and events such as Valentine’s Day or Black Friday when countless impulse purchases happen.

Sometimes, however, when your customer base is at risk, it is necessary to counterbalance this phenomenon. This can be done via providing additional information, encouraging vigorous thinking, creating opportunities for controlled action taking, and finally, tailoring messages to utilise slow-thinking techniques.

As the action bias can strike customers at any time, it is imperative to leverage and counter the bias at the right time and circumstances by designing your marketing communications accordingly.