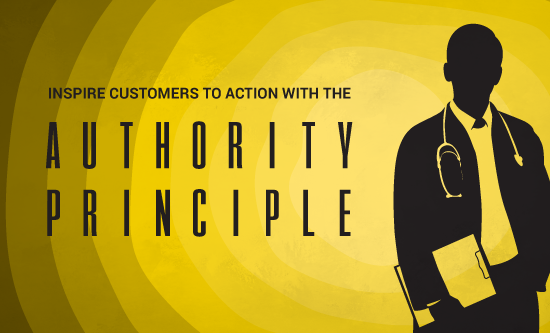 Inspire customers to action with the Authority Principle

In 1984, celebrated author and psychologist Robert Cialdini published ‘The Psychology of Persuasion’. Often referred to as the ‘marketers bible’, Cialdini’s book covers a range of different philosophies including the authority principle.

Among numerous examples of the authority principle provided in the book, Cialdini outlined the deference that medical professionals show to doctors. This isn’t necessarily because doctors know more, but rather because doctors are presumed to be an authority figure.

Explained simply, the authority principle refers to decision-making that is influenced by an institution or person that is in a perceived position of authority. More often than not, people of authority are considered to be credible, knowledgeable, and trustworthy, with significant expertise. As a result, people will place significant value upon their opinion.

This subservience to authority is strikingly evident in a series of experiments conducted by social psychologist Stanley Milgram at Yale University in the 1960s. As part of the experiment, individuals were requested to administer electric shocks (they weren’t real!) to students who were unable to answer certain questions. Despite knowingly administering what they thought were painful electric shocks, more than 65% of the test subjects continued until the end of the experiment. Only a handful of participants refused to continue, disagreeing with the coordinator (authority figure) from the beginning.

As marketers, it’s essential to recognise not only when the authority principle is most prevalent, but also how we can use it to strike a chord with our customers. According to Cialdini, there are three main symbols of authority that can be utilised on a daily basis:

Whether you’re looking to enlarge your customer base or boost yearly sales figures, it is crucial that you highlight the authority within your company. Key tactics to do this include:

Whether it is to frame a customer’s thinking, or to prime actual decision-making, the effectiveness of authority symbols cannot be underestimated and certainly boosts your conversions.