Digital Alchemy | Getting business process outsourcing right in a digital future
Take on the future of marketing with our scalable solutions.
24291
post-template-default,single,single-post,postid-24291,single-format-standard,ajax_updown_fade,page_not_loaded,,qode-theme-ver-11.1,qode-theme-digital alchemy,cookies-not-set,wpb-js-composer js-comp-ver-6.6.0,vc_responsive,elementor-default,elementor-kit-23588 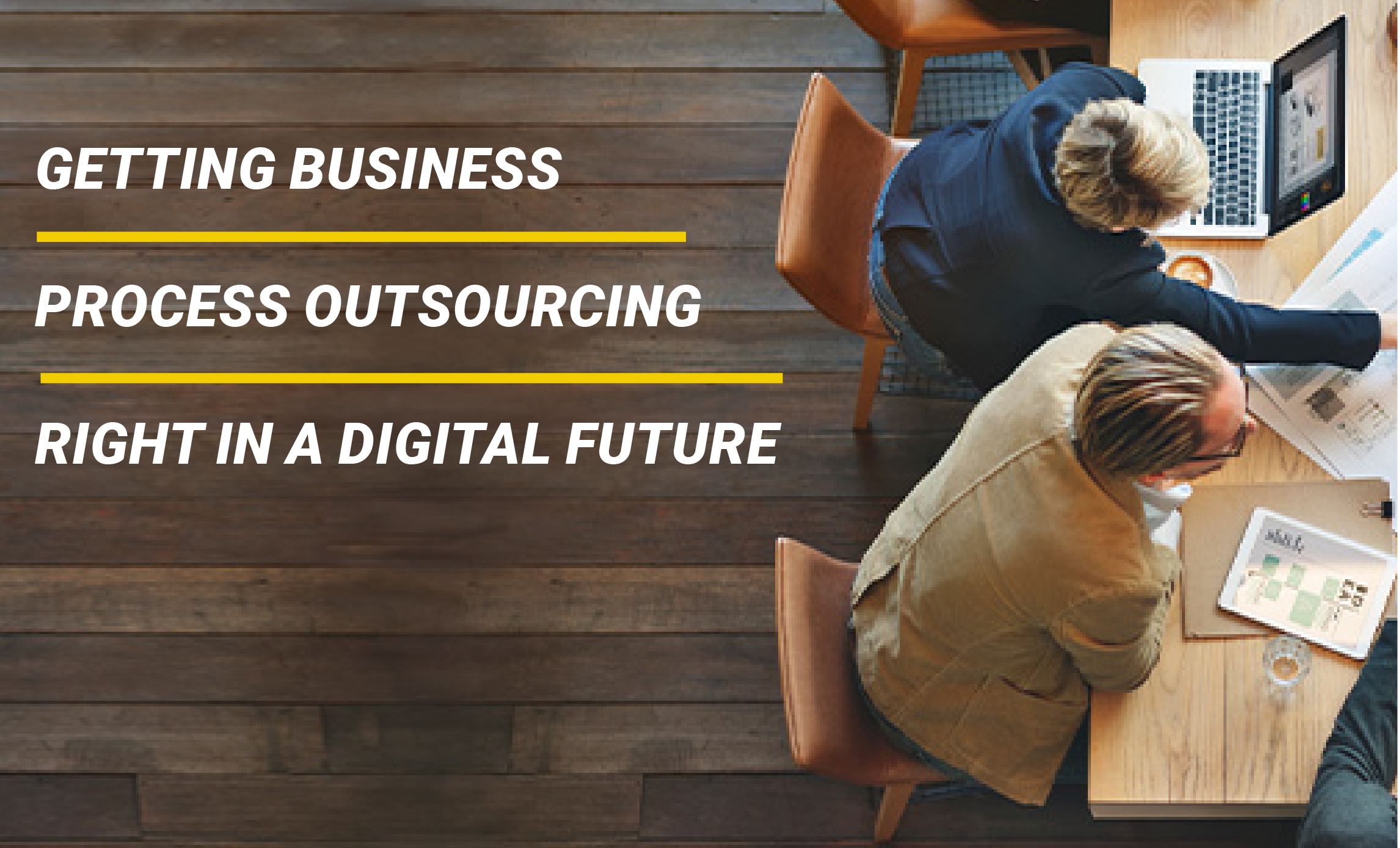 Getting business process outsourcing right in a digital future

Posted at in Marketing Automation, Marketing Optimisation by
Share

Outsourcing the management of business processes is becoming much more digital—and potentially much more powerful for buyers and providers willing to engage more strategically and collaboratively.

As recently as a decade ago, companies outsourced business processes primarily as a cost-saving strategy. While technology was used to optimize processes, it was limited mainly to basic task automation. Today, that approach is giving way to a smarter one, in which companies can outsource to capitalize on more sophisticated provider offerings. These include customized industry solutions and advances in digital technology, such as AI, analytics, and machine learning.

The experiences of pioneering organizations increasingly show that the time has come for the outsourcing industry’s focus to evolve from traditional right-shoring and basic automation to fully digitized operations through business-process management (BPM). These types of outsourcing deals are not yet common, creating an opportunity for both service buyers and providers to leapfrog ahead by generating differentiated advantages in operations and significant bottom-line value. However, the window of opportunity to capitalize on those advantages is closing. In several years, these deals will likely be table stakes. Companies can seize the initiative—starting today.

Worldwide, companies spend an estimated $230 billion on managing business processes. These range from customer-service functions, such as call centers,

to back-office processing in applications such as claims, payments, finance, and procurement. To date, outsourcing deals that explicitly call for next-generation technologies account for only a small share of the total spend. But that share is growing quickly.

A detailed analysis of 53 business-process-outsourcing deals that closed between 2016 and 2020—a sample taken from a pool comprising more than 200 such transactions—shows that about one-quarter included at least one digital component (social media, mobile applications, analytics, automation, cloud, or Internet of Things). But the number of such deals almost doubled over the five-year period. That potential opportunity stands in sharp contrast to the overall outsourcing industry’s single-digit growth rates.

An analysis of total contract value (TCV) shows a similar trend. Over the five years from 2016 to 2020, digital services grew from 30 to 70 percent of TCV, and the number of new deals with a digital component has steadily increased to almost 50 percent (exhibit).

Companies report several reasons for such rapid growth of digital in BPM deals. One is that customer demand for digital products and services has grown exponentially. Another is the worldwide adoption of cloud technologies, across industries. In 2020, our analysis shows that cloud-enabled deals peaked at 67 percent of TCV in the private sector and 63 percent in the public sector.

In turn, cloud platforms and services enable the adoption of further digital and data technologies. For example, many BPM providers are leveraging cloud-based systems in specific applications, such as for accounting and credit and cash management—to reduce cycle times for data-intensive processes. Last—and probably most important—is that digital-based outsourcing yields high-quality results. BPM buyers and providers report that incorporating digital into an outsourcing contract can deliver two to three times more impact than under traditional models, while also improving the experience for buyers and their customers.

Yet digital also poses several clear challenges. The first is achieving executive support. Digital sourcing programs require a heightened level of aspiration from the chief procurement officer and other senior leaders, along with explicit endorsement of the change, oversight during the transition, and focus.

These steps are essential to overcoming the cultural challenges inherent in any change program. Even when times seem relatively calm, organizational inertia, painstakingly built relationships, and an understandable desire for stability can lead procurement teams to stick to current suppliers. Moreover, digital sourcing doesn’t just represent a new provider but a new way to work with all providers. Given the radical changes most organizations now face on multiple fronts, some working teams may argue that they don’t have the bandwidth to support a digital procurement program as well.

Perhaps the biggest challenge is weak sourcing capabilities. Some organizations may not have the in-house capabilities to source providers for next-generation digital services. Doing so calls for a different kind of business case—based on outcomes and innovation rather than straight cost savings. For instance, some clients are now expecting providers to achieve dramatic improvements in end-user experience metrics, such as faster service and call times, or positive feedback for AI-based digital tools. Other clients want providers to deliver on transformation initiatives, measured by the percentage of automation initiatives delivered on time or the success rate for digitization projects. This evolution also means considering a different set of providers, structuring contracts to foster collaboration and shared accountability, and partnering with the provider in a much more direct, integrated manner. It is not the turnkey outsourcing that companies could apply in the past.

Moreover, sourcing processes themselves increasingly need to incorporate digital and automation—a marked upgrade from the current, and largely manual, processes that remain in place at too many organizations today. In other words, to access digital from external providers more effectively, companies need stronger skills in using digital internally.

Building these capabilities can take up to a year. Yet there is a clear reward for implementing smarter procurement processes. Our analysis has found that using digital and automation in the renewal process for outsourced contracts can unlock three times the financial impact of traditional outsourcing arrangements, while also improving the experience for internal customers.

Our analysis of the deal landscape, reinforced with the experiences of major outsourcing providers and buyers, highlights four critical elements to next-gen outsourcing deals.

A focus on transforming operations through digital. The traditional approach to outsourcing was a straightforward transaction aimed at generating marginal efficiencies. Companies handed off a set of well-defined tasks, and providers were paid based on a straight rate for time and materials. That is giving way to a new model: outsourcing to radically transform operations through digitalization with providers taking on more complex processes and being paid based on the outcome they deliver and the range of technology solutions they deploy (such as natural-language processing, robotic process automation, or AI).

Shared incentives aligned to innovation. Because these technologies and applications are still evolving, the potential value they can unlock is in flux as well. As a result, companies can structure deals to incentivize innovation through the full contract term, through arrangements such as gain sharing. For example, if a provider suggests a process change that reduces working-capital requirements or decreases days-sales-outstanding figures by several days, the provider may negotiate to retain some share of that value. Ideally, the innovation agenda aligns with the organization’s overall priorities and covers all dimensions: efficiency, effectiveness, and experience.

Redesigning digital journeys end to end. Because processes are increasingly being redesigned to capitalize on digital, companies can no longer outsource a single, fragmented slice of a process and hope to see much improvement in results. Instead, for the highest impact, the provider usually needs to own—and transform—the entire end-to-end process, through optimization, digitization, automation, and the elimination of manual processes and work. For example, a provider tasked with automating invoice processing could experience initial issues due to nonstandard formats and, as a result, suggest upstream format changes to the invoice submission process for suppliers. Over time, this expanded perspective helps build a broader continuous-improvement mentality, enabling the provider and buyer to collaborate in generating further value as the business and technological landscapes evolve.

Joint accountability for digital transformation and adoption. Rather than the hands-off arrangements of the past, in which a company and provider often worked at arm’s length, digital sourcing calls for a joint governance structure. Dedicated teams with representatives from both organizations develop and monitor a comprehensive set of KPIs, including customer experience. Providers need to be empowered to make some decisions on their own, and they need to coordinate more closely with customers as partners, in areas such as access to the technology stack or allaying data-loss concerns to the chief information-security officer.

To see how this outsourcing approach looks in the real world, consider the following three case studies.

Telecom. A large telecom player that wanted to modernize its business operations and evolve away from highly manual, inefficient processes launched an 18-month digital sourcing program, which ultimately would identify a single external provider that could increase automation and digitization across the company’s operations.

The provider offered a variety of advanced analytics– and AI–related technologies, such as robotic process automation, machine learning, and natural-language processing—together with platforms that could support organization-wide process revamps, from business units to call centers, service assurance, and other functions. But perhaps even more important than the technologies themselves was the way in which the company and provider agreed to deploy them.

Rather than focus on cost cutting alone, the two sides negotiated yearly price reductions and performance improvements, along with incentives through which the provider could share in the value of any promising new ideas it implemented. That created powerful support for continuous improvement. Further reinforcement of the collaborative approach was achieved through a joint governance structure, together with a comprehensive set of KPIs, service-level agreements, and related metrics—including ones focusing on customer experience. These were all agreed to in crafting the contract between the two sides, a process that built trust and helped align long-term interests.

Slashing the number of outsourcing providers the company uses to just one strategic relationship across business units has generated major scale efficiencies—including, for example, giving machine-learning algorithms more data to learn from. And the cost advantage was still substantial: the new outsourcing relationship led to a 60 percent reduction in operational costs.

Industrial. A large industrial manufacturer wanted to partner with a BPM provider to transform its legacy processes and business-support functions using next-generation platforms and solutions. It engaged a global BPM player to help redesign its shared-services operations through a combination of business-process reengineering, robotic and point automation, and lean principles. One of the most effective steps was the automation of billing and invoice payments from end to end; in addition, optical-character-recognition systems eliminated manual effort where possible, and a business-intelligence engine fed insights and executive-level reporting to dashboards.

Overall, the program reduced transport inventory backlogs by more than 80 percent, while productivity increased by about 40 percent, and end-customer satisfaction rose by more than 35 percent. And automating almost all billing processes revealed more than $10 million in duplicate payments.

Consumer packaged goods. A large food and beverage company had a well-established shared-services function, with consolidated finance and HR to support global operations. But costs were still very high, and integrating new business in the existing setup was becoming tedious. The organization asked a global BPM leader to transform its existing setup to make it scalable and cost competitive.

The provider brought in a proprietary human–machine operating engine that optimizes people, technology, data, and intelligence. Through that tool, the provider redesigned and standardized hundreds of HR and finance processes, implementing automation and analytics along the way. The new capabilities were first rolled out in Europe and expanded to North America, Australia, and New Zealand over the next year.

In finance, half of the company’s journal entry processes were automated, boosting real-time postings from about 90 to 100 percent. In HR, error rates in employee correspondence declined to less than 1 percent, the turnaround time for onboarding letters dropped by two-thirds, and compliance deficiencies fell by 85 percent. Across both finance and HR, the transformation boosted productivity by more than 30 percent and saved more than $5 million.


We use cookies to ensure that we give you the best experience on our website. If you continue to use this site we will assume that you are happy with it.Ok