Digital Alchemy | Deep changes in the CDP space
Take on the future of marketing with our scalable solutions.
24106
post-template-default,single,single-post,postid-24106,single-format-standard,ajax_updown_fade,page_not_loaded,,qode-theme-ver-11.1,qode-theme-digital alchemy,cookies-not-set,wpb-js-composer js-comp-ver-6.10.0,vc_responsive,elementor-default,elementor-kit-23588 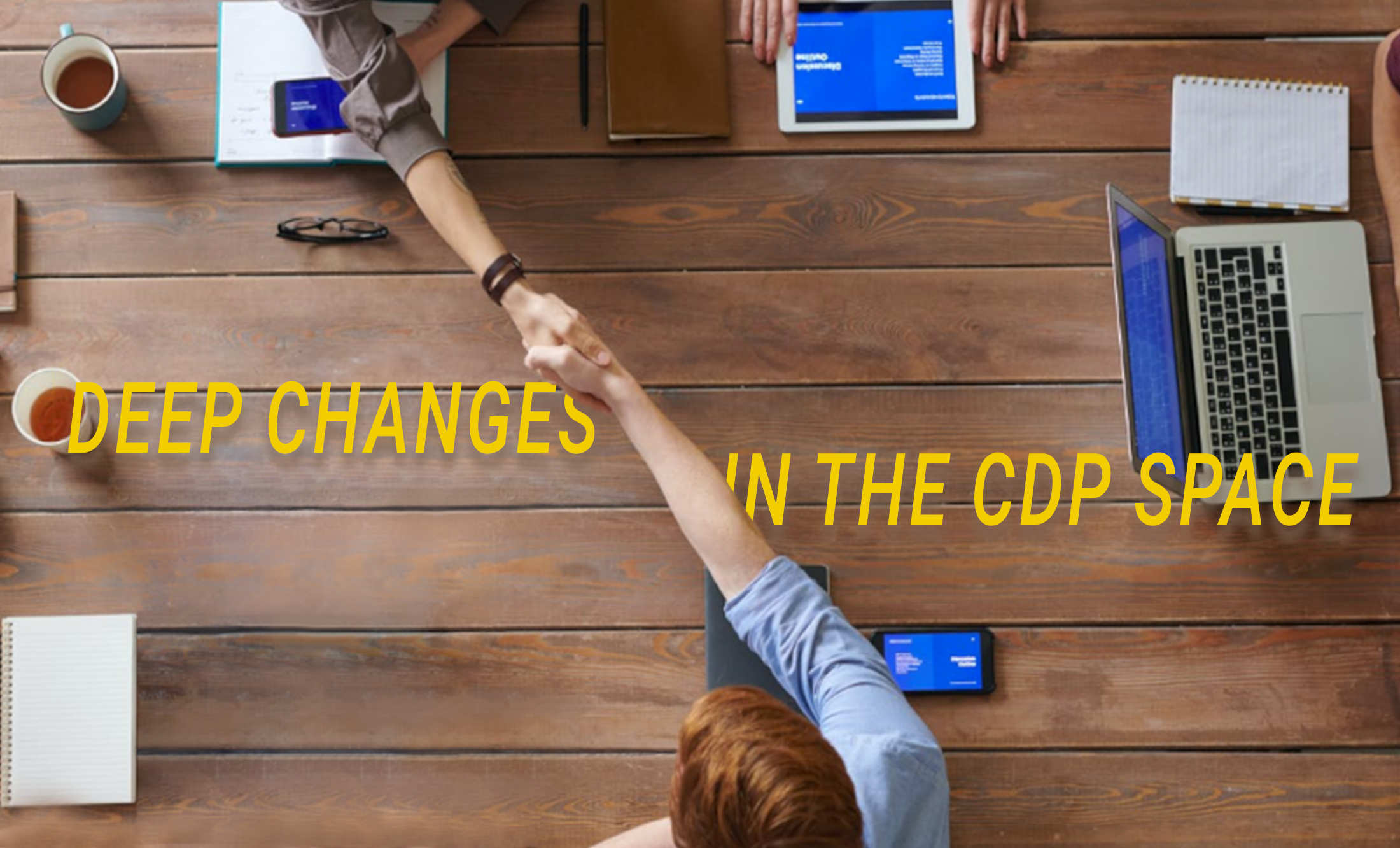 Deep changes in the CDP space

Posted at in Customer Lifecycle Management, Data Management by
Share

With many independent CDPs being acquired, is the stage set for the remaining big players to become vendor-neutral hubs within the marketing stack?

There’s a sense of tectonic shift in the marketing technology space right now. Of course, it’s a space which has been growing and evolving at a staggering pace for some ten years. I’m talking about more fundamental change.

Boom or bust for independent CDPs?

It’s easy – and accurate – to think of the CDP category as large and growing. There’s a lot of interest in CDPs, especially, but not only, from enterprise B2C brands trying to personalize engagement with their customers at scale. At the same time, independent CDPs, some of them well-established and well-known, are being gobbled up at an unprecedented rate by more comprehensive marketing suites or digital experience platforms.

AgilOne acquired by Acquia, Segment by Twilio, Zylotech by Terminus, Boxever by Sitecore, Zaius by Optimizely, BlueVenn by Upland Software, Exponea by Bloomreach: That’s a trend. At the same time, independent CDPs like Treasure Data, Amperity, Tealium and Blueshift raised significant amounts in funding this year.

Is the independent CDP category under threat or not? I asked Tasso Argyros, the founder and CEO of a leading enterprise CDP, ActionIQ, what’s going on.

“My view is that the independent CDPs that have been sold so far were either struggling to break through and had given up on being leaders of the CDP category, or they weren’t core CDPs – by core CDPs I mean the CX hub.” An example of the first kind, AgilOne, was such an early entrant to the category that its product was built on outdated technology, he said.

“In the other category are companies like Segment. Segment was a tag manager and they were trying to expand more towards intelligence and orchestration, but the reality is that their roots were in capturing and moving pieces of data around, not so much in doing analytics and orchestration – so it was hard for them to compete as an enterprise standalone.”

Argyros, naturally, sees an opportunity for ActionIQ to be the dominant independent player in the space. “That opportunity is massive and it would be too early for us to sell right now. That being said, how much space is there for dominant CDP platforms? I think two or three at most. Everyone else will get acquired at the end of the day – that’s my prediction.”

Part of the value proposition of an independent CDP, he explained, is to enable a best-of-breed stack. Adopting an Adobe or Oracle or Salesforce CDP can have the effect of locking brands in to other solutions from those big players. “You go with ActionIQ, you can have a truly best-of-breed stack. We play well with anyone.”

Treasure Data, another CDP with large enterprise brands on its client list, raised $234 million in venture funding in November. Founder and CEO Kazuki Ohta echoed Argyros’s observations. “The vendors who cannot grow faster and cannot raise the money from VCs are obviously trying to find an exit,” he said. “This is a hot industry, it’s a good time to exit.”

The need for independent CDPs

I turned to one of the closest observers of the category, David Raab, founder of the CDP Institute and an occasional MarTech contributor. “The companies buying them, in most cases, have multichannel delivery systems. Those systems are often acquired and not natively integrated, and they realize they need that CDP to pull the data together to integrate their own systems, as well as pull in data from other channels that they’re not managing. There’s a demand from their buyers for unified data. It’s really hard to build a CDP so it makes more sense to buy one. Easier and quicker.”

Does this trend threaten the independent CDP category? “It certainly shrinks the market for the independents,” he said. “What we expect to happen is that the independents will specialize more in particular niches, making it easier for them to defend their position.”

There will continue to be a need for independent CDPs at the enterprise level, where multiple functions – not just marketing – need to be able to manage and activate customer data. “That’s where ActionIQ sits, that’s where Treasure Data sits,” Raab said. “You need that CDP to be vendor-neutral. Then there will be the verticals, specializing in transport or healthcare or education. We’re seeing a lot of CDPs that are vertical industry specialists and that’s also a defensible position.”

In fact, ActionIQ recently staked its claim as a CDP for the healthcare space, while Treasure Data, which started out selling into marketing organizations, is now explicitly addressing other functions in the enterprise with its CDP for Service and CDP for Sales.

This made sense to Raab. “There are multiple buying centers. Marketing has been the primary one, but customer success has always been a buying center for CDPs. There are paths into companies which are not the marketing path or the IT path or the data team path. There’s a value in department verticalization where you have special features that work best for customer success or for whatever department you’re selling into.”

One thing that puzzled me initially about offering CDPs for what Raab calls departmental verticals is that it surely creates data siloes. Ohta explained: “It’s just a fact that our customer’s organization is siloed and also data is siloed. If you look at the 150-plus CDPs in the market, they’re trying to pitch their product primarily to the marketing department. We’re trying to change our customers’ behavior to use data in every single division so they can better serve their customers in every part of the customer journey.”

The next step, then, is to pull together the profiles in marketing and service and sales siloes, to produce a comprehensive view? “Yes,” said Ohta, “of course.”

It’s practically received wisdom that not every solution offered as a CDP is a real CDP, but in fact it might be accurate to say that there have always been different types of CDP. The distinctions are becoming starker as some CDPs aim to be not just the single source of truth on customers, but the hub for orchestrating and delivering customer experiences.

“There are a couple of types of CDP in the market,” said Ohta. “One is the vendors that came from a tag management space where they focus on the website and mobile data collection side. The other one is more on the activation, the execution side. There’s a lot of confusion around the category itself, I admit.” Treasure Data, said Ohta, could expand into execution, but it positions itself as being able to activate the data, but feeding it into other solutions – ESPs, messagine channels and so on – for execution.

The idea that the main job of the CDP should be to connect data is just wrong, Argyros told me. “We do it because we have to.” How much depends on whether the client has their data in order. “Connecting data is a means to an end, and if we don’t have to connect data we love that. We can deploy faster. What the CDP is becoming,” he said, “is essentially a next generation campaign management platform and a next generation customer intelligence platform.”

Customer intelligence is critical too, Argyros argues. The tools for doing customer intelligence outside a CDP are inherently limited. Web analytics is restricted to website activity. Business intelligence gives good aggregate level data but cannot provide customer journey level insights. “The CDP has become the de facto place to gather intelligence and tie it really well with campaigns. You go from data to intelligence to action in the same platform, which is the CDP.”

Raab doesn’t see CDPs usurping the role of MA. “Most marketing automation systems are really sending out emails primarily and there are some CDPs that can send out emails.” He offered Algonomy as an example of a CDP with core email marketing capabilities.

There’s also a key difference in the way data is structured in marketing automation and CDPs, he added. “You have a big bulk data store that stores everything in all the gruesome detail – semi-structured at best.” That’s the CDP. “Then you have a more structured data store that does all your segmentation and runs your marketing automation and so on. You’re always going to have basically two different kinds of technology, each doing what they’re best at. Are they in the same system? Great, that saves you some trouble.”

The following Kim Davis from 2021 provides their research perspective. HERE


We use cookies to ensure that we give you the best experience on our website. If you continue to use this site we will assume that you are happy with it.Ok